PLEASE NOTE: THIS blog is a reprint of an article that appeared on Huffington Post.

This isolated, serene Caribbean island floated in a calm sea dusted by soft white clouds. We circled patiently, waiting to land for hours at 25,000 feet, watching the sunset across the wing of the Gulfstream jet carrying two orthopedic surgeons, a nurse anesthetist, a critical care nurse, and two Haitian intensive care doctors working at Mount Sinai in New York. We were accompanied by Paul Farmer, the founder of Partners In Health, his student in his Global Health and Inequities program at Harvard, and Claire Pierre, a physician born and raised in Haiti.

A kind-hearted, generous man donated his plane to carry us and surgical supplies against innumerable obstacles to finally land in Haiti just as dark set upon this country and people crushed by the worst earthquake devastation in history. My wife and I woke up the Thursday morning after the quake and knew we had to go down right away.

Effortlessly and within less than 24 hours we were on a plane and hours later, miraculously, were on the ground.

Then we landed amidst the chaos — no immigration, no customs. We were greeted instead by tears and relief and hope from the local Partners In Health volunteers who lost family, friends and co-workers. We unpacked the plane and loaded up three trucks full of supplies and doctors and slowly wound our way through the rubble and chaos.

There was no electricity, patients lying all about outside on the ground, …with traumas, wounds, infections … Waiting. Waiting for someone to come, to help.

Building after building lay in ruins and people sat, stood, or lay on the sidewalks and streets, afraid to go back into their homes and buildings for fear of another tremor and collapse.

In the park at the center of Port au Prince, thousands of people slept outside — sitting talking, laughing, living while death was all around them. There was peace and calm and cooperation and acceptance among the people, even laughter and smiles on the patients in the face of no homes, no water, no food, nothing at all to soothe them except their humanity. Haitians danced and sang in the streets celebrating life and the human spirit’s capacity to survive. There was nothing to be happy about, and an unimaginable tragedy to mourn. We drove by the collapsed palace and ministries of health. No one was spared. There were 150 nurses still trapped in the rubble of the nursing school building on the grounds of the General Hospital, the epicenter of medical care in this ravaged city.

We arrived at the largest hospital in the country, the General Hospital, and were greeted by Dr. Lassegue, the director, a balding man with a wide toothy smile. He had not slept in three days, or barely eaten or drunken water. Yet he was smiling, happy to see us, happy to be able to serve and help.

There was no electricity, patients lying all about outside on the ground, or on bed outside with traumas, wounds, infections all unattended in their own feces and urine without food or water. Waiting. Waiting for someone to come, to help. Yet there was relative calm and peace as patients waited with their families attending to them — how can these people endure the unendurable? 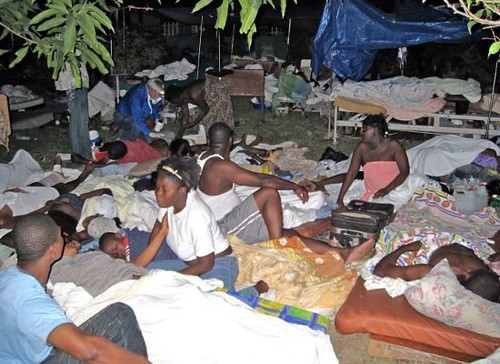 Here in Haiti, where there is one doctor for every 11,000 people, the top hospital now has only about 10 doctors and 10 nurses and a few residents with no orthopedic surgeons to handle the sea of broken bones. There are 1,500 hundred patients laying about the courtyards of the hospital — afraid to enter the buildings that normally have the capacity for 700 — with almost 1,200 of those patients needing urgent surgery four days after the quake with wounds festering and the sweetish, fetid smell of Pseudomonas bacteria in the air. The nurses have either died or are home caring for their loved one. There was little care and no operations happening even days after the earth shook their worlds apart.

Haiti is poor, broken down and traumatized, with natural disasters following political disasters and on and on. But the Haitians are not poor or broken down. Their spirits are rich and resilient and kind.

At the hospital we exited our air-conditioned land cruiser into the thick, rancid stench of decaying flesh. Around the corner from the indefatigable Dr. Lassegue was the morgue — a vast open parking lot of putrefying bodies, bloated and swollen and rotting. Hundreds upon hundreds were piled and strewn across the concrete — thrown into piles and hoisted up by their limbs into pickup trucks or by bulldozers into large dump trucks to be buried in mass graves.

The smell and taste and vision of the sea of dead rotting bodies was something unimaginable, beyond horror — a vast and sick landscape of death after only 15 seconds of earthshaking.

Then we emptied the trucks and sorted the surgical supplies into the operating rooms and triaged the patients with headlamps — attending to the sickest, those needing amputations, deciding who would be first in the morning as the light came up. We hoped for water, electricity and more supplies to help us save the wounded but there are none here at the hospital yet — perhaps they are still at the airport or circling over this island of people with the biggest and most patient hearts I have known.

Tomorrow we will start the first surgery here after the earthquake. The first amputation with nothing but a hacksaw and headlamps and a bottle of vodka to sterilize the equipment and a few rusty instruments to start. But we will do it because it has to be done and there is no one or no where else to do it.

And now I go to sleep on the cement floor of the operating room, thankful, peaceful and exhausted but happy to be here.

If you want to support this effort to rebuild the main hospital in Port au Prince and support the Haitians to reclaim their lives and their place, donate where the greatest need is now and bring immediate relief to those most in need. Donate now to Partners in Health.

To your good health,

To see more of Dr. Hyman’s photos from Haiti go to:

Beware: Some of the images are graphic.

Articles
Why You Should Not Stop Taking Your Vitamins
Articles
A 7-Step Plan to Boost Your Low Thyroid and Metabolism
Articles
Why don’t they teach nutrition in medical school?
We use cookies and similar technologies to run this website and help us understand how you use it. See our privacy policy here. I Accept