Here’s the truth: The Government recommendations released in 1980, promoted low-fat diets that have catapulted us into the worst epidemic of obesity and diabetes in history. To understand why the government told us to do something that actually turns out to be making us fat and sick, let’s first take a look at the back story.

During the 1970s, when it became evident obesity and heart disease were on the rise in the US, some well-meaning concerned politicians held hearings about how to best advise Americans about their diet, health, and preventing heart disease.

In 1977, Mark Hegsted, a nutrition professor at Harvard, led a group of scientists in the study of the connections between food consumption and heart disease.  The group issued the very first set of US Dietary Guidelines, which the Federal Government updates roughly every five years.

Low-Fat Religion: How We Got It Wrong

From the beginning, the low-fat philosophy became cemented as our official diet.

Among its findings, Hegsted’s report urged Americans to increase their carbohydrate intake to 55 to 60 percent of their total daily calories. And told us to reduce fat intake to 30 to 35 percent of calories.

Americans also learned they could protect themselves against cardiovascular disease, diabetes, and other chronic diseases by eating more fruits and vegetables. That was commendable, as were recommendations to include poultry and fish in your diet.

We were told to eat more sugars and carbs and cut way back on saturated fat from meats, eggs, butter, and whole milk, which turned out to be a bad idea.

These first flawed guidelines were replaced by even worse recommendations – the Food Guide Pyramid in 1992. At the base of the pyramid were carbohydrates, particularly refined carbohydrates like breads, pasta, rice, and cereals, of which we were told to eat 6 to 11 servings a day.

These carbohydrates break down to sugar, which gets stored in your body as fat. In addition to the 152 pounds of sugar we eat every year, we’re getting 146 pounds of flour that also breaks down into sugar. Altogether, that’s nearly a pound of sugar and flour combined for every American, every day! That’s a pharmacologic dose of sugar.

Among the havoc those refined carbs creates are inflammation (which triggers most chronic diseases including diabetes and obesity or what I call diabesity), heart disease, cancer, dementia and depression.

Equally flawed was the warning to eat fats and oils only sparingly. 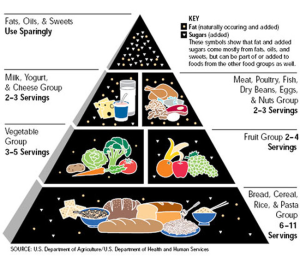 The food industry jumped right on board following the Government’s lead and fueled the low-fat craze, creating everything from low-fat salad dressing to fat-free yogurt and low-fat desserts. As good citizens, we listened wholeheartedly, which might explain our current obesity problem.

What Actually Does Make Us Fat and Sick?

Eating sugar and other refined carbohydrates turns on a metabolic switch, spiking insulin (your fat storage hormone and causing dangerous belly fat. Sugar and carbs are the true culprits behind type 2 diabetes, heart disease, many cancers, and even dementia.

Regardless, carbs were firmly situated at the bottom of the Food Pyramid. Americans were advised to eat a lot of them because they had fewer calories than fat and were thought to help prevent heart disease…

Unfortunately, other foods like healthy fats, which provide a much more efficient fuel source, were placed at the tippy top; and we were warned to eat them sparingly. Suddenly pasta became a health food and fat got demonized.

Quite simply, this turned out to be the largest uncontrolled experiment ever done on human beings, and it failed miserably.

While a slight improvement at best, MyPlate still advised a low-fat diet. Our Government just couldn’t let that one go, despite the flawed research and the scientific evidence proving that healthy fats are the way to go.

Sadly, science is for sale and many recommendations that scientists and the Government make comes from studies funded by big food companies that pay big bucks.

Fortunately, a growing community of highly aware, investigative folks are fighting back. We’re spreading the truth about food and lifestyle as the Food Pyramid and even MyPlate slowly gets banished to their rightful place – in the trash bin of history.

Instead of following the outdated, clearly wrong advice from the old Food Pyramid, you want to eat a whole foods diet with mostly veggies, some fruits, and plenty of healthy fats like eggs, coconut oil, nuts and seeds, avocados, extra-virgin olive oil and even grass-fed butter.

Stuff at the bottom of the Food Pyramid (processed sugars and refined carbs) should be treated like recreational drugs and only taken occasionally.

Food and Fat as Information – Not Just Calories

Before we can change our health, we must shift our way of thinking about food. Our relationship with fat, in particular, must change. As research proves, dietary fat does not make you fat.

Dietary fat deeply impacts health and wellbeing: Being deficient in healthy fat has an impact on our emotional and overall health. Fat deficiencies affect our hormones, immune system, digestive health, skin health, weight, and ability to deal with stress.

In fact, fat deficiencies can adversely affect our mood, cognitive health, behavior and overall brain function, which makes perfect sense considering our bodies (including our brains) are made up of fat. Every cell membrane is partly made of fat. We must have healthy dietary fat for our body to function properly.

Historically, we ate mostly wild foods which are very rich in omega 3 fats (like wild fish and animals and wild plants), and very limited amounts of inflammatory omega 6 foods.

One thing I do admire about the Food Pyramid is its simplicity. So I built my very own food pyramid, based on the principles of the “Pegan Diet”, which combines the best of a Paleo and vegan diet. This is the way that I’ve been eating for years, and I’ve never felt better.

1. Focus on the glycemic load of your diet. This can be done on a vegan or paleo diet, but is harder to do on a purely vegan diet.  Focus on more protein and fats, such as nuts (but not peanuts), seeds (flax, chia, hemp, sesame, pumpkin), coconut, avocados, sardines, olive oil. And lots of non-starchy veggies.

2. Avoid dairy – milk is for growing calves into cows, not for humans. Try goat or sheep products and only as a treat. And always choose organic.

3. Avoid gluten – Most flour is from FrankenWheat – look for heirloom wheat (Einkorn); and if you are not gluten sensitive, then consider gluten containing foods as an occasional treat.

5. Eat beans sparingly – lentils are best. Stay away from big starchy beans. About ½ to 1 cup a day max.

7. Think of sugar as an occasional treat, to be used sparingly, in all its various forms (honey, agave, etc.) 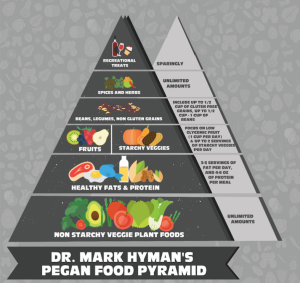 The US Dietary Guidelines fall way short. To understand more about why dietary fat got demonized and why the right fats support optimal health, check out Eat Fat, Get Thin.

In my new book, I provide you with the tools you need to stay happy and healthy for life while eating truly delicious and satisfying foods.

Videos
Alzheimer’s = Type 3 Diabetes
Videos
You Can’t Exercise Your Way Out Of A Bad Diet, But Here Are 7 Reasons Why Exercise Is Still Important.
Videos
Is Your Meat Eating Candy?!
We use cookies and similar technologies to run this website and help us understand how you use it. See our privacy policy here. I Accept