You’re going to love this simple take a spinach salad. Baking a layer of miso and crackling it over a bed of spinach and toasted leeks is the key to this flavorful recipe, which is great on its own or alongside grilled chicken, steak, or mushrooms.

Spinach is a powerhouse leafy green, offering insoluble fiber, antioxidant vitamins A and C, bone-building vitamin K and calcium, and plant-based iron. Leeks have a milder and sweeter taste than an onion along with beta-carotene and kaempferol, a polyphenol antioxidant thought to protect against certain types of cancer.

I hope you make this recipe a new part of your salad rotation. 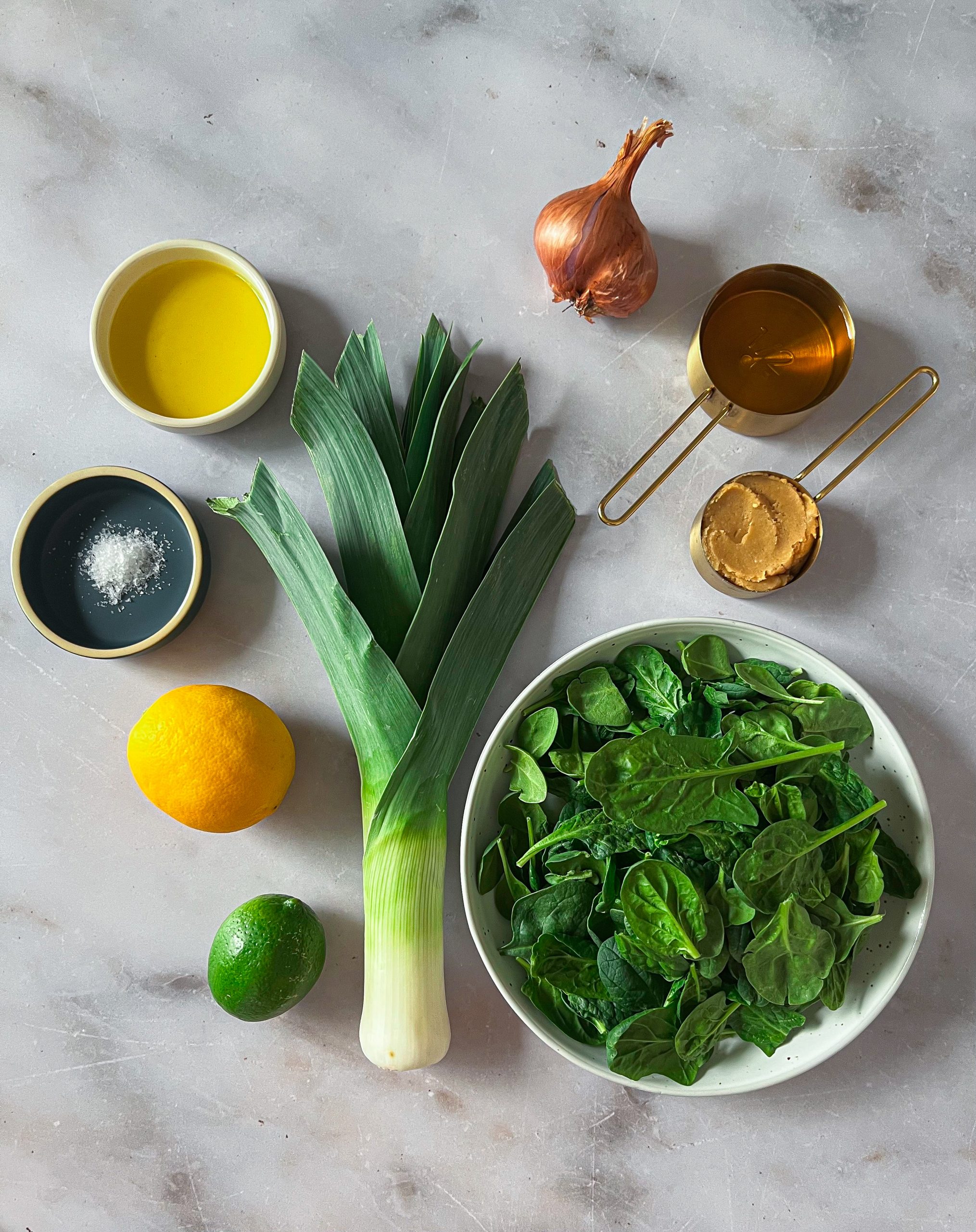 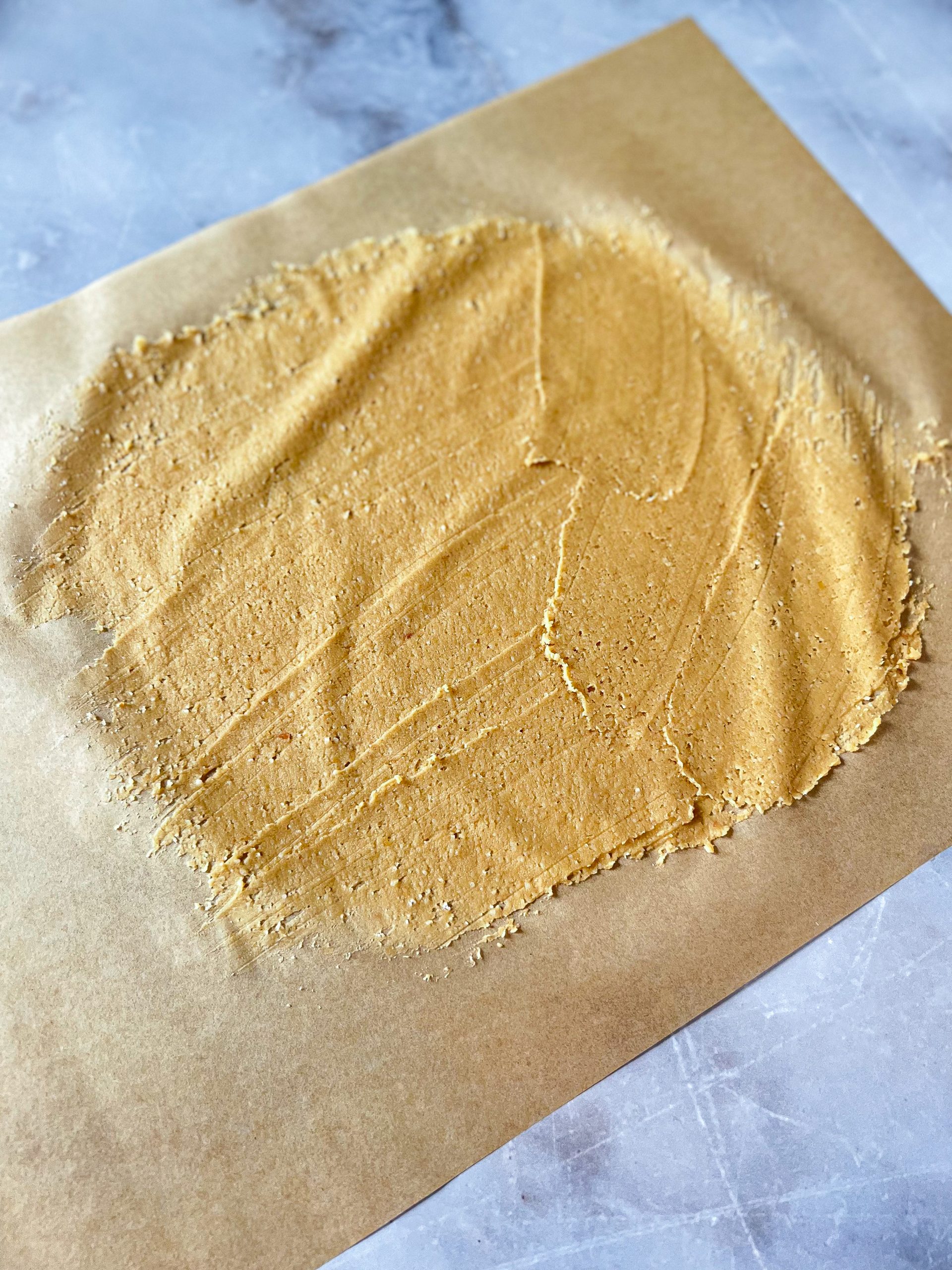 2. Line a baking sheet with parchment paper. Spread the miso paste as thinly as possible using a soft spatula or icing spatula. Bake for 45 minutes or until browned, checking frequently towards the end to avoid burning. Remove from the oven, cool slightly, then crumble into pieces and set aside. This can be made ahead of time, just store it in an airtight container. 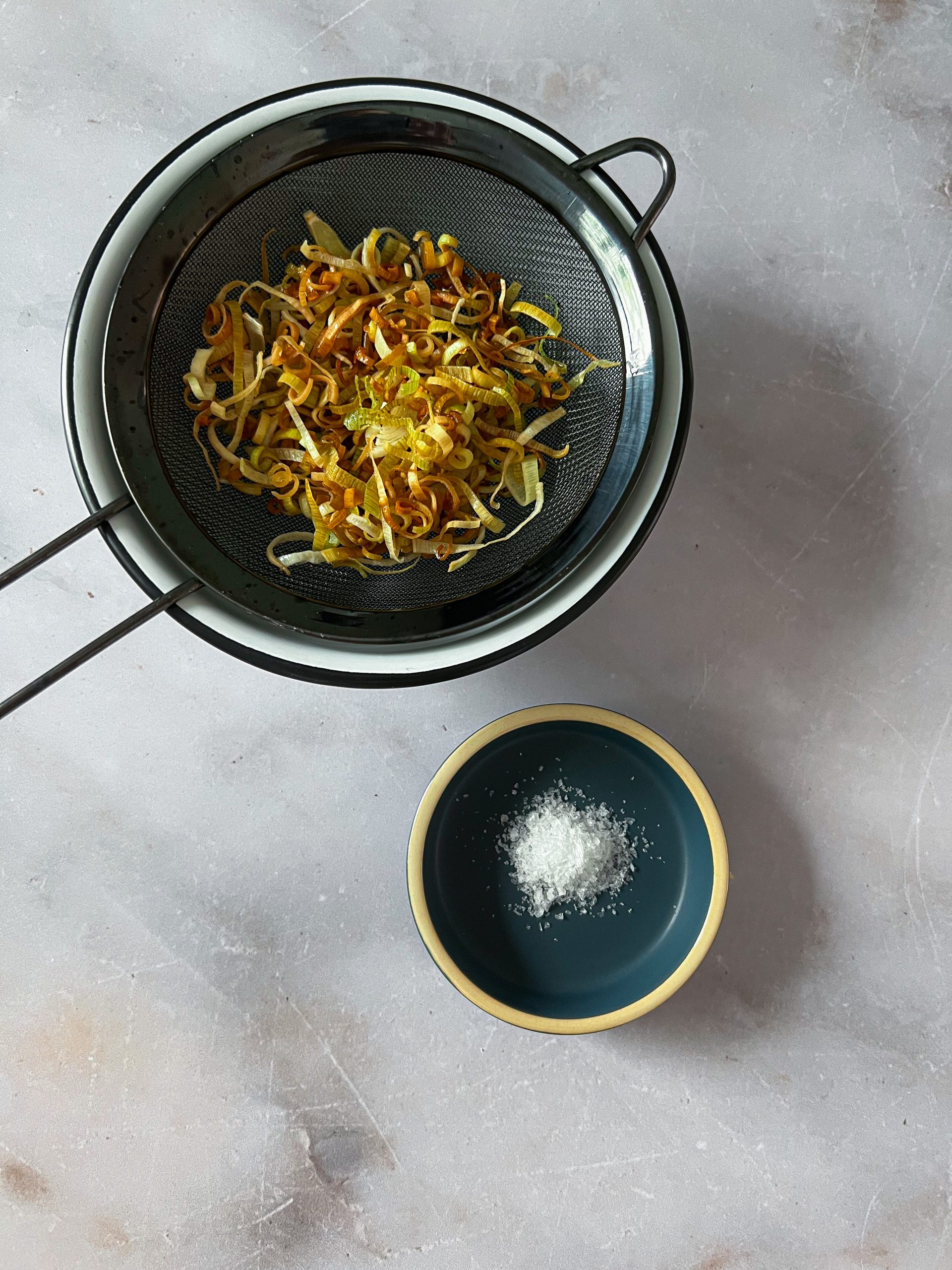 3. Heat the avocado oil in a small skillet over medium-high heat. Toss the leeks into the skillet with the oil and fry until lightly browned and crisp, about 2-3 minutes. Drain the oil from the leeks and lay them on a paper towel, sprinkle with flake salt. 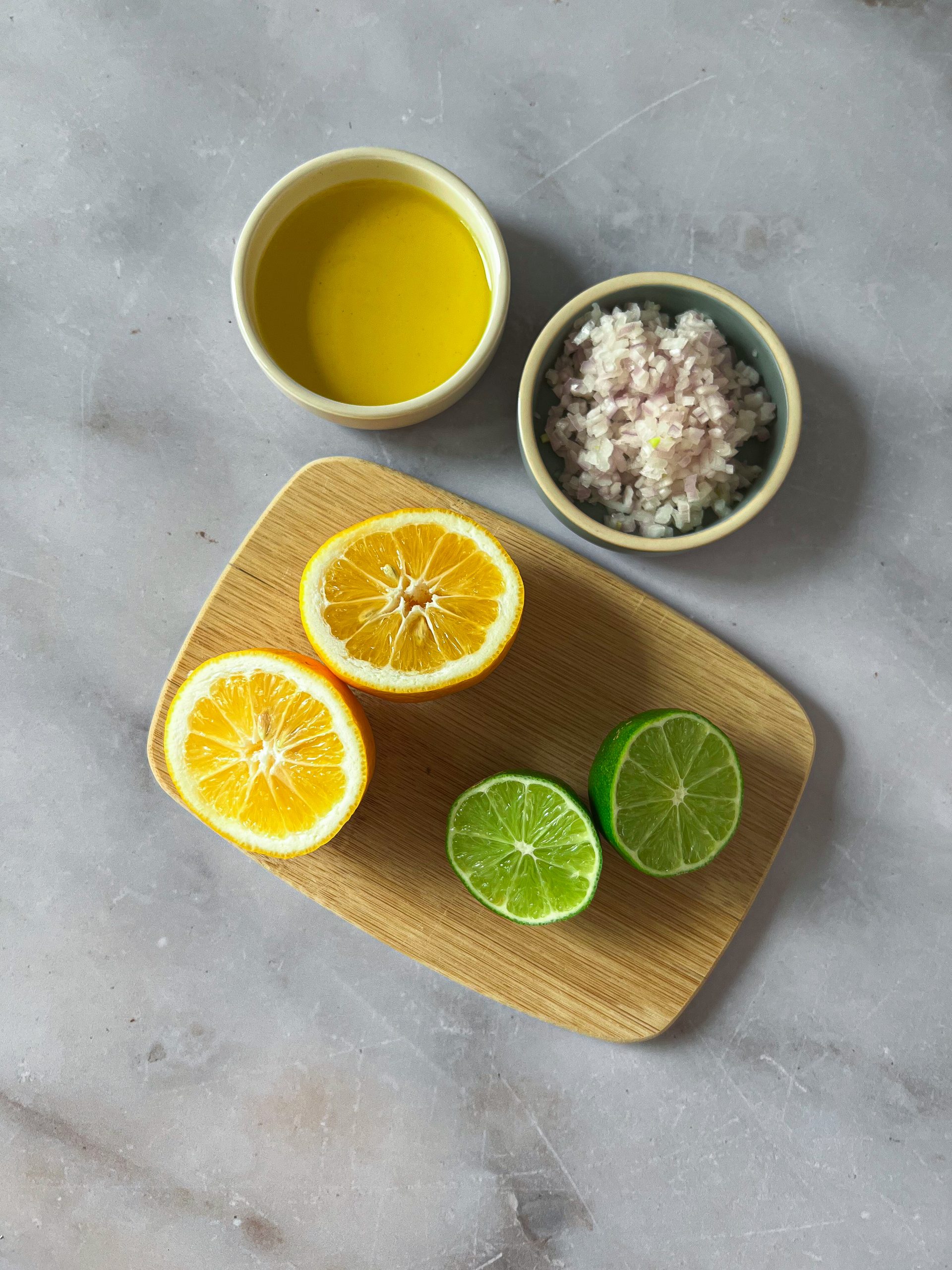 4. Whisk the shallot, lime, lemon, and truffle-infused olive oil together in a small bowl to create a vinaigrette. 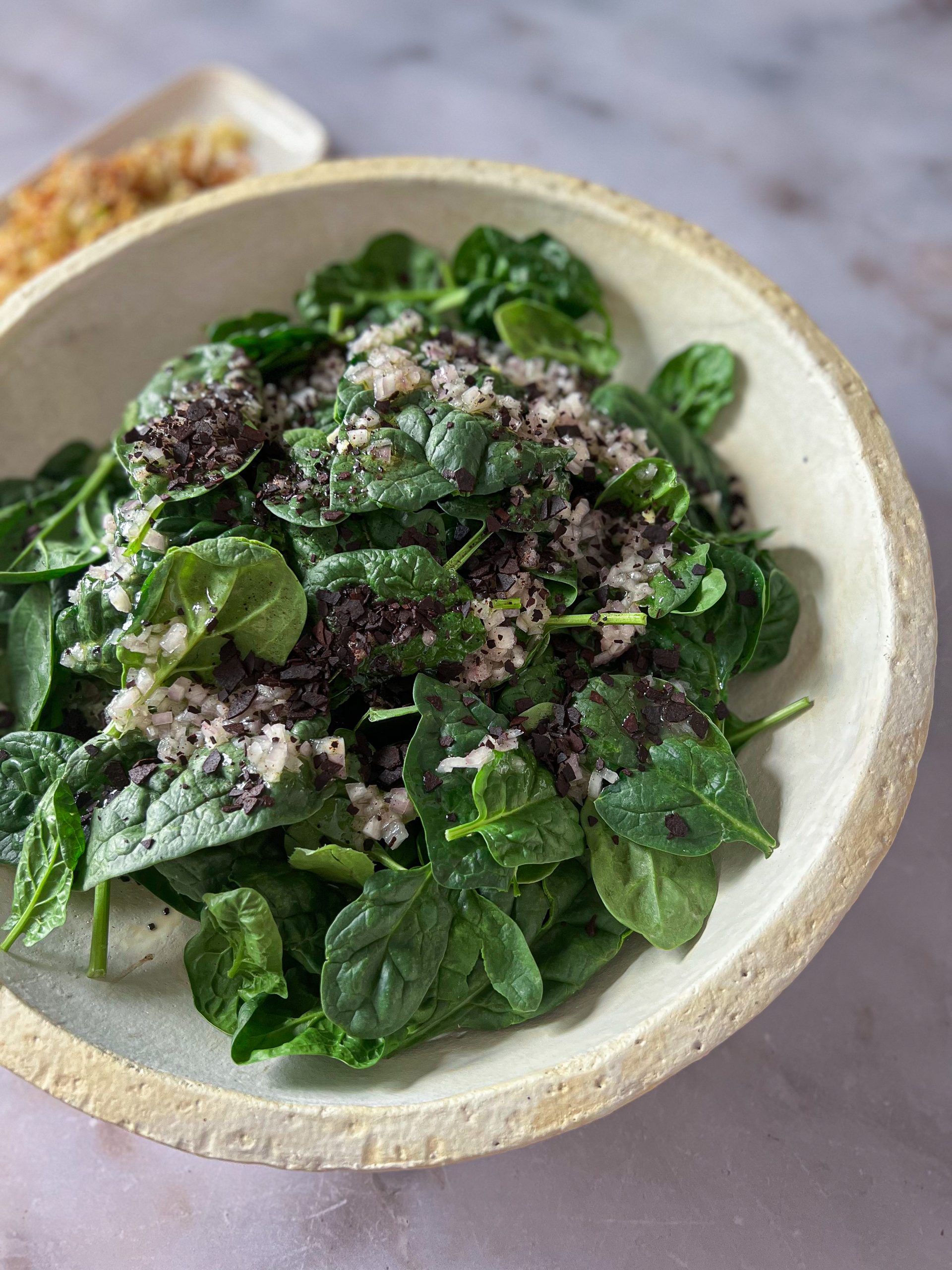 5. Toss the spinach with the shallot vinaigrette, then top the salad with the crackled miso and crispy leeks.

Grain-Free Wild Blueberry Waffles
Popsicles 7 Ways
Four Favorite Dips & Dressings
We use cookies and similar technologies to run this website and help us understand how you use it. See our privacy policy here. I Accept

This website uses cookies to improve your experience while you navigate through the website. Out of these cookies, the cookies that are categorized as necessary are stored on your browser as they are essential for the working of basic functionalities of the website. We also use third-party cookies that help us analyze and understand how you use this website. These cookies will be stored in your browser only with your consent. You also have the option to opt-out of these cookies. But opting out of some of these cookies may have an effect on your browsing experience.
Necessary Always Enabled
Necessary cookies are absolutely essential for the website to function properly. This category only includes cookies that ensures basic functionalities and security features of the website. These cookies do not store any personal information.
Non-necessary
Any cookies that may not be particularly necessary for the website to function and is used specifically to collect user personal data via analytics, ads, other embedded contents are termed as non-necessary cookies. It is mandatory to procure user consent prior to running these cookies on your website.
SAVE & ACCEPT
Evidence Based
Send this to a friend
Thanks for signing up!